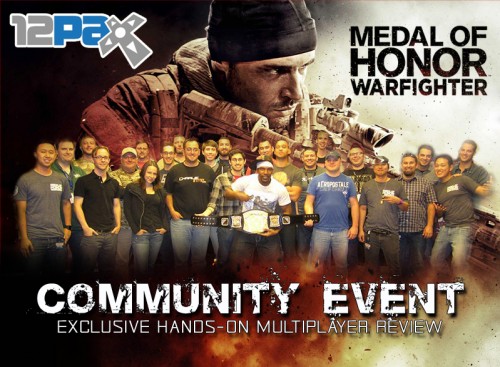 I am not just a fan of the Medal Of Honor franchise. I am a battle hardened veteran of almost every Medal Of Honor “battle space” ever made available to me from the fine folks at Electronic Arts.

I was part of the team that destroyed “Railgun Greta” (I always thought that would be a great name for a band). I was there with the French Resistance, when they put a stop to the V-1 menace. I survived the horror of “Panzerknacker Unleashed“. I experienced the tragedy & triumph, of both D-Day & Pearl Harbor.

And of course, I was there when Mother, Preacher, Voodoo, & Dusty all said goodbye, to one of their own.

But enough about me, let’s talk about Medal Of Honor: Warfighter. I just thought that it was important for you to know as you read this, that the opinions expressed here, are not those of some casual gaming blog writer, or some detached industry media guy who could really care less about the game.

These are the opinions of a guy who knows this franchise, and has come to expect a certain something when he plays Medal Of Honor.

20 or so Medal Of Honor community members fill the lobby, and you can feel the sheer anticipation pulsing throughout the room.

After signing in, we are finally led upstairs to a huge meeting room filled with food, fun, & fireteams.

As we started the gameplay portion of the evening I was instantly caught off guard, by just how good the game looks.

I play Battlefield 3, so I know what the Frostbite 2 can do. But you could immediately tell that Danger Close has a firm grasp on the engine’s real capabilities.

The second thing that I noticed was the sound design. It was even a topic later in the night, during a Q&A session with the DEV team.

The ambient audio in general is superb. But the gunfire in particular, is simply stunning. Each weapon has it’s own distinct sonic personality. You can almost “feel” the difference between weapons, based solely on how each one sounds.

With regard to the essentials, Warfighter’s basic gunplay and control interface, remain relatively unchanged from the game’s predecessor. All in all, to this point, I’m feeling pretty optimistic about everything I’ve experienced so far.

But, keep in mind that 2010’s Medal Of Honor was a hybrid endeavor. With Danger Close developing the Singleplayer mode (on a heavily modified version of the Unreal Engine 3), and DICE (EA Digital Illusions CE) developing the Multiplayer mode on the Frostbite 1.5 engine.

In fact, that may have been the only thing wrong with the 2010 iteration. You could tell that the two modes were somehow related, but were also distant cousins at best.

So, as I blazed my way into Warfighter’s Multiplayer mode, I was a bit apprehensive about what I might find.

However, I’m happy to report that I was pleasantly surprised to find that Danger Close had re-imagined the Multiplayer mode, and has aptly transplanted it’s DNA into the mode’s fabric.

Unlike 2010’s game, you can tell that Danger Close developed this mode. It didn’t seem like I was playing someone else’s version of Medal Of Honor. The HUD, and player icons were well thought out, and unique. I didn’t notice the usual visual clutter on the screen like you see in some shooters. And thanks to the technology of the Frostbite 2, player movement was smooth, and very natural.

The Spec Ops mode was interesting, though I rarely found myself using it. It gives you a very quick “IR” peek at your environment when you need to amp up your situational awareness a bit. Some players may complain about it, but as I mentioned, it’s not something you can “lean on” during the course of the game. It really is something that you’d only use if you find yourself in a “tight spot“.

There is also a “suppression” effect that occurs when you find yourself taking enemy fire. It’s similar to the Battlefield 3 suppression mechanic, but is toned down enough to distract & disorient you, more than it disables you. I like the execution of the effect overall, and I think most players will agree.

Other elements from the 2010 game make a return to Medal Of Honor: Warfighter. Offensive & Defensive Support Actions are back, and have been tweaked a bit.

They seem more useful and balanced, but must be used strategically in order to achieve any real results. I also love the way a player must think before he deploys one of these actions. For instance, if you launch a UAV (Unmanned Aerial Vehicle). Your player actually stops, and literally “launches” the UAV by hand. If you call in an A-10 “air strike”, your player must again stop, and actually “lase” the target for tasking. It makes the player vulnerable, which means you have to use discretion when deploying any of the support actions.

I also love the revised melee mechanic. At one point, I jumped off a raised position to engage an unsuspecting foe below, dispatching him with a well placed tomahawk. If I could have, I would have “high-fived” myself.

And although we only played on two maps during the event (Somalia & Sarejevo). It seemed like we played on 3 or 4 different maps, due in large part to the unique map design Danger Close implemented. Depending on which game mode we played, we’d find ourselves fighting on a different portion of the overall map.

Sarajevo, is set at the Kosovo Olympic Stadium. What was once a proud structure that represented something glorious, is now just a shell of rubble & untamed vegetation after years of civil unrest in the region.

I can’t put into words how dense, and cluttered the terrain is on this map. Be advised, there won’t be any “Run & Gun” here kids. To properly navigate this AO, you almost have to “move & shoot” the “Tier 1” way. I think the saying goes…”slow is steady, and steady is fast“.

A “bombed out” bobsled track snakes it’s way throughout most of the map, and provides hundreds of vantage points from which to engage the enemy. In addition to the many man-made structures that litter the map, rocky perches and natural terrain also provide players with a plethora of tactical options.

SECTOR CONTROL-
This mode is exactly what is sounds like. It’s very similar to Battlefield 3‘s “Conquest” mode.
Players must capture & defend designated “nav points” on the map, to push the enemy back and ultimately control the AO.
It should also be noted that because of the nature of the game modes we played, the infantry combat is fierce at times, and will really test a team’s ability to work together & communicate. In other words…team work is essential.

HOT SPOT-
Next up is “Hot Spot“, my personal favorite of the three game modes we saw during the event.
In this mode, players are tasked with either planting or defusing a bomb that will destroy a designated tactical target if it isn’t defused in time. The cool thing is that you don’t choose where to plant the bomb if you’re attacking, HQ does. Similarly, players on the defending team will have 2 or 3 “potential” target sites to defend, but won’t know which site is actually being attacked, until the bomb is planted. It makes for a mad scramble at times. And the fire fights that ensue are epic to say the least.

HOMERUN-
Finally, we come to the “e-sport” game mode that was named by the Medal Of Honor community at-large. Homerun is a fast paced, no respawn, “Capture The Flag” game mode, that almost always comes down to a “last man standing” scenario. The fact that you only get one life per round (10 rounds in all), cranks up the stakes considerably, and was the only game mode that evoked cheers from the community players in the room. It sucked to die, but it was actually fun to watch the match unfold from the “dead lobby“.

Overall, I’m glad that Danger Close seems to understand the importance of innovation with regard to the Multiplayer mode. The Fireteam feature alone, proves that they are at least conscious about getting players to work together to achieve the objective.

But with that being said…there is one aspect of the Multiplayer mode that I’m concerned about.

Honestly, I’m still a little skeptical about the clan support options that we’ll see with Medal Of Honor: Warfighter. When asked about it, we were told that clan management would take place via Battlelog (like Battlefield 3). I firmly believe that developers have neglected the demographic of players who prefer a “team first” gaming experience. Most Multiplayer shooter titles today, seem to have forgotten those of us who want to be part of a team. A group of like minded gamers, who share a real collective identity. We want the ability to create and manage private matches, and to manage our clan down to the last shooter. We want the ability to achieve an actual online presence. But sadly, most titles focus on the individual. A players rank or KDR seem to be more important than the greater good of the team these days, which I think promotes a selfish “me first” type of dynamic. We’ll see how Danger Close chooses to handle this, but I’m not 100% sold on the idea of using Battlelog to manage my clan.

After all, most of us already have a “friends list“.

Regardless, I’ve got my fingers crossed. All I know is that for about six and half hours in Seattle, I was Tier 1. Danger Close has clearly found it’s identity, and has put it’s stamp on the franchise. And without question, I left Seattle with an excitement I haven’t felt in a while. Medal Of Honor: Warfighter seems to have everything a grizzled Medal Of Honor veteran like me would expect, or want.

Until then shooters. Watch those corners….and Stay frosty.